My summer holiday this year saw me on the Amalfi coast, in the midst of copious amounts of pizza, pasta, ice-cream and limoncello. Not the right season to be writing this, is it? But it’s not until now that I finally pulled out some dried pasta which I bought while there – candele. Beautiful no?

Finely slice half the carrot and onion into matchsticks, toss in olive oil and bake at 120 degrees C until crispy.
Finely chop the rest of the vegetables and brown them with the chicken breast and some mixed herbs. Add 50ml of the red wine and water to cover the chicken breast. Continue to cook until the meat is cooked. Finely slice the chicken and puree the vegetables to make a sauce.
While cooking the candele pasta, make a red wine reduction with the rest of the red wine and the sugar.
Stir the vegetable purée and chicken into the pasta and turn it onto the serving plates. Sprinkle with the red wine reduction, olive oil, dried vegetables and a tiny amount of grated parmeggiano.

Firstly I have to say, the texture of this pasta was unlike any other store-bought dried pasta I’ve ever cooked or tasted. Dried, the pasta was very thick, so it took a long time to cook. (I was heartbroken to have to halve them to get the whole length to cook.) And once it was cooked the pasta was perfectly al dente – a quasi-impossible feat with supermarket pasta.
As for the sauce – such an elaborate recipe considering it’s just some pasta, but it’s really good and unusual!
Posted by Busy Skillet at 22:32

Email ThisBlogThis!Share to TwitterShare to FacebookShare to Pinterest
Labels: Pasta

Chocolate cake… with a strawberry compromise

So my guy pointed out that I never made a “proper” chocolate cake.  (Hmph!) So I set out to make one - a dark chocolate cake with chocolate frosting. The reason I never made frosting is quite simply that I’m not really into sugary things. What I do really like, is strawberries with chocolate. So a very serious argument ensued about whether the cake would or would not have strawberries. (I’m sure regular, sane couples argue about these sort of things all the time. After all such a calorie costly endeavor means serious business.) Anyway we finally agreed that strawberries would contaminate only my half of the cake. 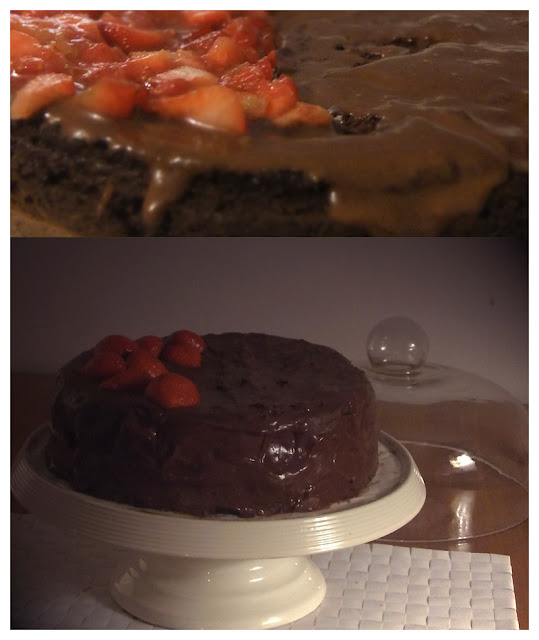 Even after tasting the result we still differed. I loved the strawberries in the cake. My notes from the day:
Posted by Busy Skillet at 22:29

I really like Guinness. I also really like risottos. I obviously had try a Guinness risotto. There are loads of recipes out there, but I thought I ought to use my head and create something of my own... and it worked surprisingly well!
Guinness is Irish. The Irish eat lamb. Ireland is associated with greenery. Peas are green. Therefore: 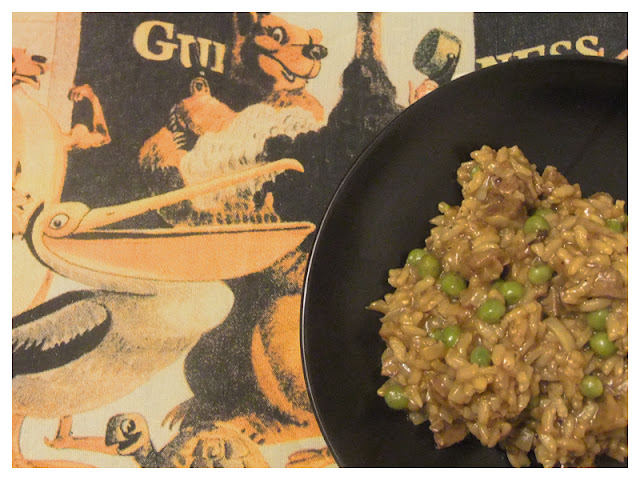 I first wrapped the lamb in a piece of foil with a couple of tablespoons of Guinness and baked it until it was just cooked. Then proceeded as for a normal risotto. Fried the onion in some butter. Added thyme and rice, stirred, and then added the liquid (first the Guinness then the stock) a little at a time, simmering slowly and stirring occasionally. Added the peas and chopped up lamb steak midway. When all was done I seasoned with salt and pepper and stirred in a good few tablespoons of butter. I also stirred in some grated parmggiano, but next time I think I'll use cheddar instead.
I stopped to taste really often because it's very difficult to get the seasoning right. The Guinness seems to suck all the flavour out of the rice and replaces it with a metallic taste. At the same time you can't salt it too much because the lamb and Guinnes have very strong flavours. This is why I think that the butter (and I’m sure the cheddar would too) works to bring it together. I think it would taste very good with chicken instead of lamb too.  It's very hearty and strong - a comfort dinner for the big and strong! ...not that I'm either :-P
Posted by Busy Skillet at 08:13

Email ThisBlogThis!Share to TwitterShare to FacebookShare to Pinterest
Labels: Rice

After two weekends spent cooped up inside, in an attempt to put an end to my (very persistent) cough, finally a weekend to make up for it. A friend took us out for a drive through the Buckinghamshire countryside, interrupted only by  a stop for a pub lunch at The Nag’s Head. Such a perfect day to be in Britain! Bright and sunny all day, gorgeous autumn colours, and a spot-on lunch. I always order steak and kidney pie whenever I happen upon it at a good pub or pie shop. It’s probably my favourite pie, yet something that I almost certainly will never cook at home because I think that the kidneys would be quite yuck, and I also cannot stand supermarket pies. 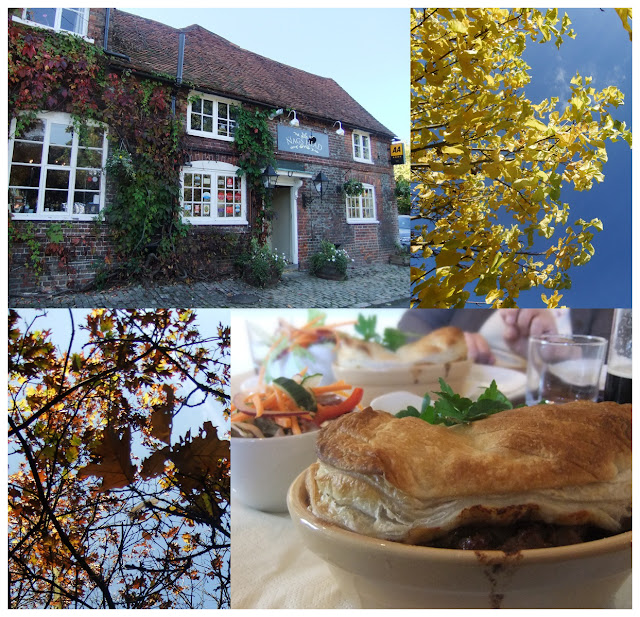 Back home, I roasted some potatoes which I’ve been abnormally excited about! They’re purple majesty potatoes which taste just like regular taters, but have more antioxidants, and more importantly, they’re prettier! 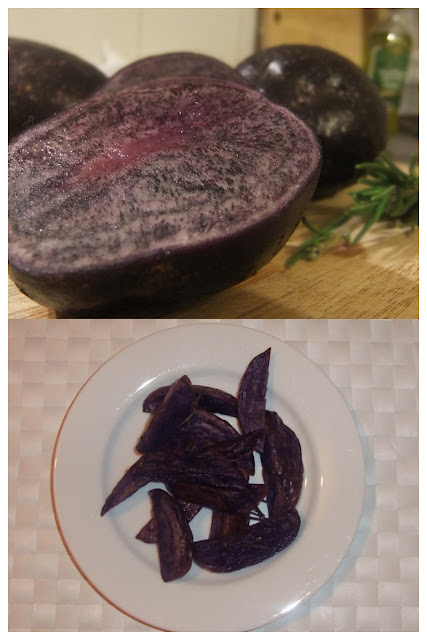 I’ll think up something more imaginative and artistic for them next time. But pretty food which is better for you: a keeper ingredient – yay!
Posted by Busy Skillet at 23:15

Email ThisBlogThis!Share to TwitterShare to FacebookShare to Pinterest
Labels: Restaurants, Side Dishes


After gathering advice from the more experienced cooks in the family, it was time for octopus attempt #2 with the remaining half. Advice and directions were as follows.
There are two types of octopus, the chunky ones and the baby octopus. We had a large octopus, which one must first freeze for around 3 weeks, then defrost and boil for 30 to 40 minutes, and finally cut up and fry 15 minutes in some olive oil, loads of garlic, rosemary, marjoram, mint, and mixed herbs. 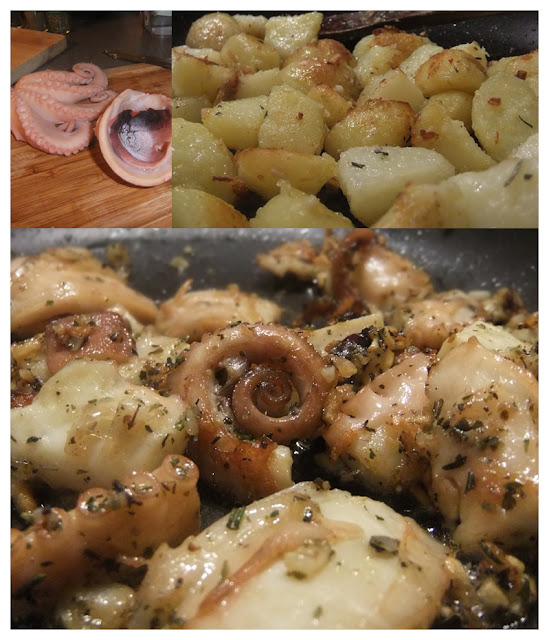 This was an improvement in texture from last time – the body especially was very tender. The legs were still a little bit chewy. I suppose the quality and freshness of the octopus purchased do play a part in the final result. We bought ours from a bowl of ice in Borough Market, not a Mediterranean seaside fish market. Nevertheless, the flavour of octopus is always perfect with some spaghetti, or potatoes. Since I hate deep frying I didn’t feel like making chips, so I boiled the potatoes, then peeled and shallow fried them in some vegetable oil and garlic. Much simpler, and in my opinion, much softer and nicer than chips.


(What on earth is one meant to do with all the oil left over  from deep frying? I once watched a documentary demonstrating the trouble of some poor guys who had to clean up the London sewer walls from several feet of grime build-up resulting from all the cooking fat discarded down the drain. It was so disturbing!)
Posted by Busy Skillet at 22:38

Email ThisBlogThis!Share to TwitterShare to FacebookShare to Pinterest
Labels: Seafood

I've always wanted to cook scallops because they look so posh. So today I bought a pack of little unshelled scallops and opened up The Joy of Cooking on the Scallops Meuniere recipe. It actually instructs you to make some breading mixture, but I couldn't be bothered to be quite frank. So instead I dried up some chunks of a Mediterranean bloomer and blitzed them into breadcrumbs to coat the scallops with. 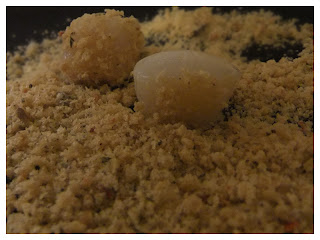 After that, all that remains to be done is to fry the scallops in olive oil and butter for around 3 minutes and then drizzle them with lemon juice. I literally started flipping the scallops as soon as I had placed the last one in the pan, and took them out the second I finished flipping the last one - I was really scared I would overcook and ruin them! They were really soft and juicy and melt-in-your-mouth lovely though; I'll definitely make them again (and I'll try not to burn any of the breadcrumbs next time). Served up with some risotto milanese. 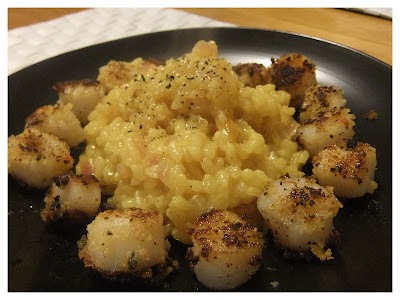 Email ThisBlogThis!Share to TwitterShare to FacebookShare to Pinterest
Labels: Seafood, Shellfish, The Joy of Cooking

Today's dinner was picked out from The Silver Spoon. My boyfriend worked on the turkey which looked and tasted lovely. The recipe is pretty simple. The turkey steaks are sauteed in a covered pan with onions and white wine, while the almonds are simmered in milk and brandy and then blended into a paste. Quite an unusual looking dish in my opinion but we loved the crunchy almonds on the turkey. 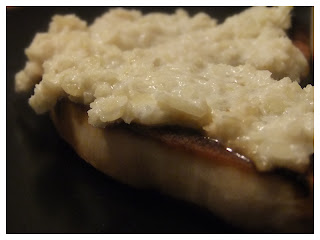 I made the mushrooms, which looked so posh in ramekins. (Everything looks posh in ramekins doesn't it? But especially something au gratin.) The recipe was simple enough. Some mushrooms are sauteed in a pan with a little bit of diced ham and onion. Then topped with white sauce + egg yolk, breadcrumbs, and a spot of butter. Baked in the oven for 20 minutes - et voila! 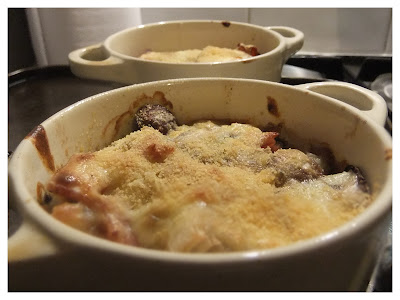 The only modification I would have made to this recipe is to chop the mushrooms, rather than leaving them whole or in thick slices. The steaming hot mushrooms scalded my mouth a bit when I bit into them. Otherwise, it was absolutely delicious!
Posted by Busy Skillet at 23:09